Today, I’m sharing the story behind the story of the Brazenbourg duet. SPOILERS ARE AHEAD! Read only AFTER you’ve finished both books in the duet.

I’d wanted to write a spin-off series for Arianna and Finn for a while now. Their first story (Royals 3) was released in 2015 (!) and since then, they’ve popped up to get married (Royals 5) and have a baby (Royals 7). I always wanted to delve deeper into Finn’s brother Henry and his deceptions, and the lasting effects of his rule, but wasn’t quite sure how the story would turn out.

So, I waited until my muse piped up with an idea, which she finally did in 2019.

Then, inexplicably, she took a long vacation.

These two books were soooo hard for me to write! This is what happens when I try to force myself to write, rather than letting my creativity lead me. If you’re a long-time blog reader, then you’ve heard me say before how I flow with my creativity (or try to). That’s why I don’t always know what I’m going to write in a year, though I do always have ideas (I talked about this a little more in my blog post on my 2021 publishing plans). Stress doesn’t help my creativity either, and 2019 was stressful for me (because of health issues and my day job), and 2020 was stressful also for obvious reasons, which hampered the writing and editing process.

I essentially wrote both in the duet together, and it took me quite a long time to write them. I finished writing the initial drafts near the end of 2019, then the pandemic hit, which caused delays in the editing process. So it wasn’t until the end of 2020 that I’d finally gotten through the edits (and that was mostly because I had time off from work before New Year’s and spent 11 straight days working on it).

As for the plot, the idea for Emiliana and the end of book 1 came to me easily (sorry Finn!), but adding all the details and nuances and new characters took a lot of time. It’s also why I added a cast of characters to the front of the books, to help everyone (and myself!) keep track of all the many people on the Council and in the books.

Let me also say – I did debate whether or not to delay publication after the events in the U.S. on January 6, 2021. When I wrote about Emiliana taking over the throne in the books, it was obviously 2019 and well before the coup attempt in the U.S. In the end, I decided that the events were different enough that they hopefully wouldn’t trigger anyone emotionally when they read it (and I certainly hope that turned out to be the case for all of you reading the books).

Back to the plot – From Arianna and Finn’s perspective, I wanted to add more depth to their marriage. They love each other – that’s never in doubt – but that doesn’t mean they don’t have issues to work through. By the end of the second book, they’re much more like true partners in their marriage.

I also had an idea for Sarah and Rio’s storyline. I’d originally had this idea for maybe a short story featuring them, but as I was writing the duet, it felt right to weave it into these books. I still have more I’d like to write for them, but I loved the idea that while Finn was putting his family past to rest, Rio was also putting his family in their place. I can’t say for sure if Rio’s family is fully gone (horrid family members always seem to show up again and again, don’t they?) but he’s getting a little respite for now.

Finally, the question I know you’ll ask – what about the epilogues? Let me first say that these are not the epilogues I wrote in my earlier drafts! The epilogue in the future featuring Eloisa was originally taking place on her coronation day after Finn passed away (I know, I know!) but Arianna was still alive. After getting my editor’s feedback, though, I changed it so Finn and Arianna were still alive (but by then our fearless King Gabriel and Queen Genevieve had passed away). If you’re interested in reading that original alternate epilogue, leave a comment below and let me know!

Just as with some of my other epilogues featuring the royal children in the future (like the ones at the end of Rise, Seaside Valleria 5), I’d definitely love to have a future series featuring Eloisa, Liliana, and the rest. There’s always so much I’d like to write (and I definitely have other books I need to finish first), so these will not come anytime soon. In the meantime, you never know what else might show up in an epilogue of another book or series.

Thanks so much to all of you who have read it and loved these books, and a special thank you to everyone who has left a review for one or both of them. If you still need to pick them up, links are below to Bastard (book 1), Battle (book 2), and the box set. Paperback copies are available through Amazon. 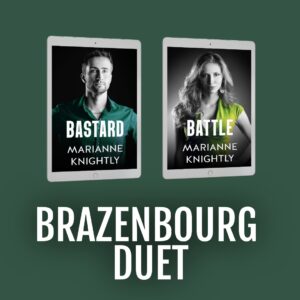 4 thoughts on “Story Behind the Story: Brazenbourg Duet”