Today is the last day in my muse series (at least for now). Today we’ll talk about the bright side of the muse – she has one, I promise! 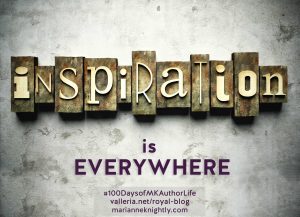 The great thing about the muse (or, really, creativity in general) is all the different directions it can take you. You can get inspired by the simplest thing and it can take you anywhere. Take this week, when I spotted the heaps of yellow and green pollen on my car (boo allergies!) when it got me to thinking about a story. Actually two very different stories.

In one story, my brain went paranormal or sci-fi. I imagined that the pollen was actually some sort of chemical released by an alien race, to entice human women. (Have you ever read an alien romance? Don’t think alien like, you know, Alien, but think super hot alien guys that are physically human but might have differing skin color and have some major cultural differences).

Not your speed? How about this next, more contemporary romance-like story…

She rushed from her building, her sky high heels clicking madly as she run-walked to her car.

She couldn’t be late, not today. Not when her boss – the Andrew Garrett, of Garrett Industries – was expecting her to pick him up and play chauffeur all day.

She didn’t want to drive the man-whore around. She had a master’s degree, damn it, and the right certifications to boot. She’d been told she’d be hired as a project manager, but had ended up the asshole’s assistant instead. But, with the job market the way it was, it was the best she’d been able to get.

Which meant if she was late this morning, she might be out of a job by lunch, and she might not find another for months. So, she had to make it work.

Her heels clicked faster as she gave up any attempts to fast-walk and just started running. She made it to the parking lot, and saw her car parked under the tree where she’d left it. She kept running as she rummaged in her bag, eventually looking down when she couldn’t find her phone. She needed to keep it handy in case the boss called with a change in plans.

If he’d been with someone last night, for instance, she’d have to drive to the skank’s house to pick him up. She hated getting those calls.

Distracted, she didn’t see the curb.

Her hand reached out to brace her fall.

Her body thunked as she hit the car. Grasping wildly, she managed to get a hold of the door handle and eased herself to the ground.

Then she caught sight of her skirt suit.

Pollen. Damn shit was everywhere these days. Now, she was coated in it.

Her black suit had streaks of it everywhere, with large blobs where she’d fumbled before she fallen. She rushed to one of the side mirrors to see what the rest of her looked like…it wasn’t good. Her hair – her glorious chestnut hair – was dotted with green and yellow, a kind of psychedelic glitter streaming through her strands.

What should she do? She didn’t have time to change. She’d just have to try and brush off as much as she could and pray the boss didn’t look at her today.

Just then, her phone started ringing.

On her hands and knees, she crawled and reached under the car where her phone had fallen. It was ringing in her hand, the professional photo of her too-damn-sexy face of her boss staring back at her.

…Where does the story go from here? Is Andrew calling her for a pickup from another one-night stand? Does our heroine improvise and find something in her car to wear? Or does she show up pollen-covered and flustered, so he fires her? What happens to her if he does? Or, does he give her a break, and maybe that’s the turning point in their relationship? The story can go in infinite directions at this point. I also realize this isn’t the strongest start to a book, but it was just off the top of my head for this post. Think about how the scene could change from when she stepped outside before she even got to the car. Maybe her boss is already there waiting for her, making snarky comments about the pollen on her car, and how it isn’t fit to drive him around. Where would the scene go then? Let your muse run wild with ideas!

Here’s a trick I didn’t mention in my previous post about tempting the muse. One of my favorite things to do while reading a book is actually to just…stop. That’s right. In the middle of a scene or before I start a new chapter, I’ll just stop and think of where the story might go before I follow the author’s path. Even if I’ve read a book a hundred times and know the ending, I’ll still imagine how a scene could have ended differently. I do this not because I don’t like where the author went with their book – far from it! – I do it because it’s another way to exercise those creative muscles.

I gave you an example of how to do this with the story snippet above, but now try it with the book you’re reading now, or your favorite book or scene.

Our beautiful, brainy muse has the power to take our creativity in any number of directions. Follow it next time and see where it leads you.

Does your brain lead you in different creative directions, whether that’s for writing or art or crafting or sewing or creating another way? Comment on this post and let me know!