I’ll be spending the next couple days finishing up my muse series. We’ve talked about the muse in general, tempting her back, and what to do when she comes back with too many ideas. Today, I’ll talk about her dark side. 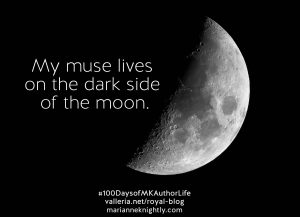 Some might say the dark side of the muse is writer’s block (the dreaded “b” word!) but I think it’s more generally when you have difficulty writing. (Side note – writer’s block would likely be another series of posts, so I won’t delve into that now). For me, it’s not a block necessarily, it’s that the ideas are more stuck in a bottleneck (think the middle part of an hourglass) and I have to wait until they make it through the other side. Another way of looking at it? It’s the dark side of the moon.

Have you ever seen Apollo 13? There’s a scene where the crew in space goes radio silent because on the far/dark side of the moon they aren’t able to communicate with control back in Houston. It’s only after they’ve orbited around the moon are they able to communicate once again. That’s sometimes what it feels like, as though my muse has just popped around the back of the moon for a while and I just need to wait out her return.

So, how do I deal with my muse’s dark side? I mix things up. The ideas are there, but for some reason my muse is refusing to communicate with my fingers to get the words typed on the page. If I can’t type, I try to speak. So, my favorite technique is to try dictating the scene(s) I’m writing.

There are a lot of great articles out there about the different options for dictation, so I won’t go into those here (check out the Creative Penn (a great resource for anything writing-related) and this article from Zapier). I will only add that if you do go with Dragon, make sure you sign up for Ebates first to get 9% cash back (that’s the cash back bonus at the time of this post). I use Google Docs for dictation.

Google Docs is free as a part of Google Chrome (also free). If you’re an Android/Google person, then you should know how to access it (the Zapier article goes into detail about Siri for Apple users). Even though I can type pretty fast, when I’m having difficulty getting the words on the page, I can usually speak them even faster. During one recent session, I spoke over 2,000 words in the upcoming Royals book in about 45 minutes! On my best day, I’ve only ever been able to type 1,000-1,500 words in an hour.

There are some limitations to the Google Docs voice-to-text recognition. The biggest one – limited punctuation! I can’t add quotation marks as I’m speaking, which means after I’m done dictating I have to go back and add all of those in. Other punctuation is missing, too, as well as in-sentence ones like dashes. Another big downside is that it censors me when I use curse words (meaning it won’t type out the word asshole when I speak it; instead I get this: a******). If you read my books, you know I love a good curse word, so this is VERY annoying. There could also be formatting issues (this is only relevant if you’re the one creating the ebook – which I do for my books – otherwise, your proofreader and formatter should catch these). Overall, though, it does work for a lot of what I need. I hope Google expands this feature because some software (like Dragon) can be really expensive and Google Docs is a fantastic free tool.

By using dictation software, I’m forcing my brain to think about my story a little differently. I’m not in my normal sitting and typing position for writing. When I dictate, I’m usually standing and speaking into Google Docs on my phone through a headset, and I think that change in habit helps to spur my muse into action. The first time I tried dictation was really awkward. If you’re not used to saying all of your words aloud, it can be jarring. However, once you get into the swing of things, it can be a real timesaver (even if I’m forced to go back and correct punctuation and formatting issues).

So, if your muse is giving you trouble, try dictating your words and see how that goes.

Have you ever tried dictation (for a book or even a grocery list)? What dictation software do you use? Comment on this post and let me know!