Before we continue with my series on overcoming fear, let’s celebrate a new release! Rush, Hector & Millie’s story, the first in my Seaside Valleria series, is out now! 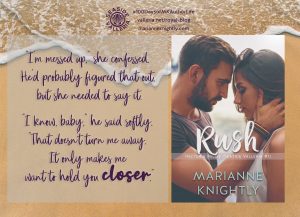 “I’m messed up,” she confessed. He’d probably figured that out, but she needed to say it.

“I know, baby,” he said softly. “That doesn’t turn me away. It only makes me want to hold you closer.”

Continuing with my fear series, I’m going talk about fictional fear. This is fear we make up (or fictional fears I give my characters).

The main character in my new book, Millie (or Amelia) has a lot of fears. (P.S. – this isn’t really a spoiler for the book, in case you haven’t read it yet.) Some of her fears are real: dealing with the burden of debt or the fear of always living a life where you’ll need to struggle. Other fears aren’t real, like avoiding a date with a guy because you don’t think you’re good enough or pretty enough. Those are fears we create (or fears that others create/reinforce in us) that keep us from living the life we want to live.

Do you ever find an excuse not to do something? I know I have. Fear manifests itself in excuses. Next time it happens, think about why you’re putting it off. Is it something you genuinely don’t want to do? Or is it something you just feel you’re not that good at, so you avoid doing it all together?

For me, when I first started writing, the latter was me. I convinced myself what I was writing was total shit. Instead of working to make my writing better, however, I’d just decide not to write. My fear of writing (or really, my fear of failing at writing) was keeping me from writing at all. I’ve said this before, that the writing in my earlier works (like the Italian Shipping Millionaires series) is inconsistent and not as polished as my more recent books (especially my new release). But at the very beginning, this was a whole other level of bad, but being bad at something doesn’t mean you shouldn’t do it. It took time for me to work through those fears and decide to keep writing and keep improving. An athlete doesn’t start off being a professional, it takes years of conditioning and practicing – and, yes, even failing and losing – to achieve success. The same is true for writing. While some might have that ‘overnight’ success, most of us don’t have that career. It takes time and a whole lot of fucking effort. Rome wasn’t built in a day, and your dream won’t be built in a day either.

To get better, I took writing classes, I researched, and I developed a habit of writing. Not every day (I’m just not someone who can write every day, with my day job and health) but writing steadily doesn’t need to be an every day thing. It just has to be a regular thing, whether that’s a few days a week, or only on weekends, or thirty minutes in the mornings before the day job. And brainstorming – thinking of ideas for future books and characters – also counts in my book as time spent writing, and is sometimes even more important than the words on the page. Check out my post on habits to see some of the resources which have helped me develop and stick to good habits.

When we examine what we’re afraid of, when we get to the root of that fear, then things start becoming less scary. Don’t be afraid to put effort towards your dreams.

What excuses have you told yourself in the past? Comment on this post and let me know (if you’re receiving the blog by email, just click “Read More” to navigate to the blog page to comment).