I’m continuing my overcoming fear series with a post on fear of success.

There are many things in life that you can be afraid to succeed at, from more mundane things like keeping your desk clean (I don’t always succeed at that one) to bigger goals like being a kickass aunt to my nieces (I totally win that one). Writing is something I want to succeed at. Am I there yet? It all depends upon how you define success.

One of the worst barriers to overcoming a fear of success is to compare your success to others. I’ve certainly done this. There are many other authors out there who are doing better, selling better. The preorders for my new series haven’t been doing as well as I wanted them to be…does that mean my new series is a failure before it’s even been released? No. It just means I might need to work harder to promote it. I talked yesterday about my journey to discover the root of my fear of writing. What’s at the root of a fear of success? 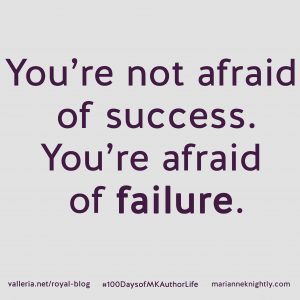 You’re not afraid of success. You’re afraid of failure.

In any journey, you will fail. I’ve failed. I’m a firm believer that failure is just life correcting itself, and leading you back to the path you should be on. Here’s an example from my writing past. My first published work was not the Italian Shipping Millionaire series. My first work was actually a series of romance short stories that focused on the same couple. Where are these stories you might ask? You won’t find them (unless you were one of the few who bought them on Amazon years ago when I first published them; they are no longer for sale). I did SO much wrong with those stories. The first covers were awful (as in AWFUL), the writing wasn’t that great, either…I could go on. But I learned SO much about writing and publishing in that failure journey.

Everyone fails. Richard Branson, Elon Musk, even other authors have failed during various parts of their careers. Learn to embrace failure, and you will succeed. I had to become friends with failure, and trained myself to learn from it, rather than despair of it. Whenever I fail at something, I take some time to assess why it happened. I don’t dwell (well, I don’t dwell a whole lot), but try to focus objectively on why I might have failed, and how I can avoid it in the future. For example, when I do another Vallerian spin-off series (yes, I’ve got another one planned!), I’ll use what I learned from the launch of the Seaside Valleria series to help me, and I’ve come up with an action plan to help me next time.

Failing is okay. Everyone fails in life. If you think you’re the only one who has failed, you’d be wrong. My first romance short story series wasn’t even my biggest failure in writing or in life. Learn how to deal with failure, and you will also learn how to succeed. I’ll talk a little bit more about how your mindset can help you embrace failure on Wednesday. Tomorrow I’ll talk about a different kind of fear, so stay tuned for that.

What challenges have you faced embracing failure or overcoming a fear of success? Comment on this post and let me know (if you’re receiving the blog by email, just click “Read More” to navigate to the blog page to comment).