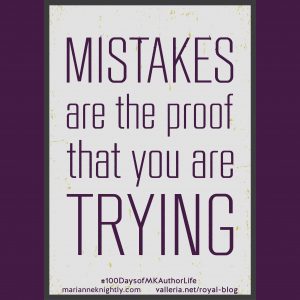 I’m a firm believer that everything in life happens for a reason. If I fail at something or make a mistake, that is just life’s way of putting me back on the right path. This week, I contacted my editor for an extension (so I could turn in Seaside Valleria 3 a little later this month). With everything else going on (namely finishing up Royals 10, Rush, and Ripple), I made a mistake and didn’t allot enough time for this. Fortunately, my editor is amazing and was able to accommodate me. Now, I’ve got to push hard to finish everything up in the next few weeks.

Mistakes are okay, as long as you learn from them and plan better in the future to avoid them. I’ve already allotted more time to write Seaside Valleria 4 (though I won’t be trying to finish up 3 other books while writing that one; I’ll just be finalizing Seaside Valleria 3), so I’m optimistic about meeting that deadline later this year.

Have you made a mistake recently? What have you learned from it? Comment on this post and let me know!

1 thought on “Mistakes Are Okay”