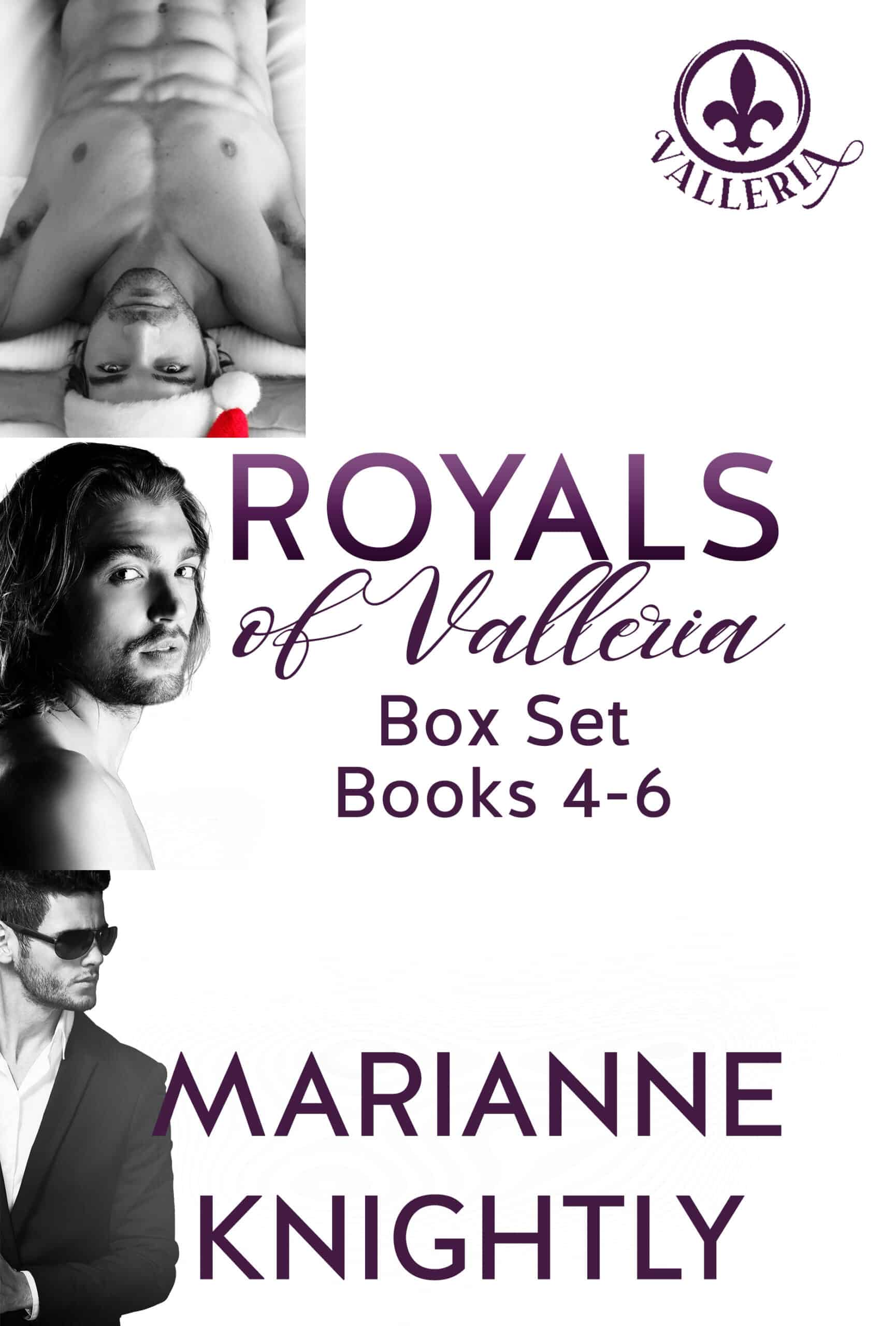 Read the love stories of Prince Nathaniel and Princess Catharine, and join the royal family for the holidays.

This box set contains the books 4-6 in the Royals of Valleria series: Charlotte & Nate, A Royal Holiday (a novella), and Catharine & Edward.

This box set contains books 4-6 in the Royals of Valleria series: Charlotte & Nate, A Royal Holiday, and Catharine & Edward. These novels feature royal families that love one another (even while they annoy or fight with each other), elements of suspense and politics, and a look behind fictional palace walls. These are standalone novels in the series with no cliffhanger, and feature sexy scenes and swearing. Emotional trigger warning: potential assault, domestic abuse, and pregnancy.

A playboy prince ready for love.
Prince Nathaniel, Valleria’s newest Minister of Finance and Treasury, likes it when numbers add up. What doesn't add up is his attraction to Charlotte, a woman whose kisses are as sweet and addictive as her desserts and whose tough exterior hides a painful past. It's true he's been dubbed the ‘Playboy Prince’, but Nate may be ready to settle down – if only he can convince Charlie to take a chance on him.

A hardened woman, softening her heart.
Charlotte Wyler has worked long and hard to overcome a tough American upbringing to become one of the top chefs at Valleria’s royal palace. Charlie’s used to the heat of the kitchen, but not of Nate's lips against hers. Even though his easygoing attitude and irresistible smile unnerve her, she doesn’t want to be another notch in his – or anyone’s – bedpost.

A dangerous conspiracy, putting them both in the line of fire.
Just when Nate and Charlie begin connecting on a deeper level, scandal ensues. Discrepancies in the royal coffers means Valleria is deeply in debt, placing both Charlie's and Nate’s jobs in jeopardy. As Nate prepares to deliver a controversial austerity budget to the Royal Council, both he and Charlie also begin to unravel deception near the highest levels of government.

A Royal Holiday (Royals of Valleria #5) – a novella

The season for stolen kisses and royal wishes is here. Catch up with the Vallerian royal family as they celebrate the holidays together … and apart.

The day of the Holiday Ball and her engagement party has finally dawned for current commoner and future princess Rebecca, love of Alexander, her fiancé and heir to the throne. However, when a royal scandal breaks just days before the ball and implicates Alex, will they recover in time to navigate through the ball and their first Christmas together?

After years of difficult holidays, English Lady Grace is ready to make some new memories with her prince, Marcello, but can she give him the one thing he wants most?

Charlotte, head baker for the Vallerian Royal Palace, has been working at a frantic pace leading up to the holidays all while recovering from a gunshot wound. When Nate decides to spirit Charlie away, will his surprise rise to the occasion, or fall flat as a bad cake?

Pregnant Princess Arianna has made a home in the small country of Brazenbourg with its prince, Finn, but her first holiday away from Valleria proves to be harder than expected. Can Finn pull off the impossible and grant Arianna her most fervent Christmas wish?

Come visit Valleria this holiday season, where surprises abound, dreams might come true, and a series of events plans to make for a very interesting New Year.

This novella features stories of four royal couples navigating their first holiday season together, a royal family that loves one another (even while they annoy each other), and a look behind fictional palace walls.

A princess faking a romance to fool her parents.
Princess Catharine, second in line to Valleria’s throne after her elder twin brother, has been issued a queen’s edict: become engaged by the time of her elder brother’s wedding, or else they’ll choose someone for her. Cat selects Philip, a perfect pawn to fake a romance for her parents. Or, he would be perfect, if she wasn’t falling for her bodyguard and Royal Protection agent, Edward ‘Bash’ Bashiera.

A bodyguard challenging her royal duty for love.
Eddie’s venerable veneer hides a man devoted to his family and a past he’d rather forget. He’s always kept things professional, until his princess is the one caught in the crossfire. Once she’s in his arms, it’s hard for him to let go.

The future of the monarchy is in her hands.
When circumstances change, and suddenly Catharine must ensure the family legacy, can she put aside a growing love for duty? And, when a terrible deception comes to light, will Edward be able to protect Cat when she needs it most?

This novel features a love between a bodyguard and his princess, families that love one another (even while they annoy each other), and a look behind fictional palace walls.