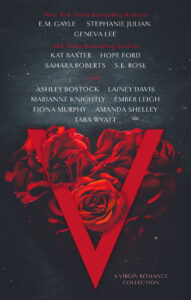 Surprise! 🎉🎉🎉 I’ve been keeping this news under wraps but now it is time to share – I’ve teamed up with 13 authors to release a new anthology featuring virgin romances!

You never forget your first time. Fourteen of romance’s hottest authors bring you a collection featuring sizzling all-nighters, short and steamy quickies, and everything in between. All with one thing in common: it’s all about the V…

The collection includes the following novels & novellas:
Jack of Hearts by Kat Baxter
Nothing But Trouble by Ashley Bostock
Deep in the Pocket by Lainey Davis
V-Card Sweetheart by Hope Ford
Gabe’s Obsession by E.M. Gayle
Seducing Whitney by Stephanie Julian
Alexander and Rebecca (Royals of Valleria #1) by Marianne Knightly
London Dynasty by Geneva Lee
Breaking the Sinner by Ember Lee
His On Demand by Fiona Murphy
Jasmine by Sahara Roberts
A Fierce Princess by S.E. Rose
Vince by Amanda Shelley
Scoring Position by Tara Wyatt

My book in the anthology is Alexander & Rebecca’s story (Royals of Valleria #1), which I know many of you may already have, but I still hope you’ll pick up the anthology for all the other FABULOUS books. This anthology is ONLY AVAILABLE UNTIL FEBRUARY 28th, then it’s gone forever, so don’t delay in picking it up!

To celebrate the V Collection, the authors have teamed up to offer one lucky reader a $50 Amazon gift card!

NO PURCHASE NECESSARY TO ENTER OR WIN. MAKING A PURCHASE OR PAYMENT OF ANY KIND WILL NOT INCREASE YOUR CHANCES OF WINNING. VOID WHERE PROHIBITED OR RESTRICTED BY LAW.