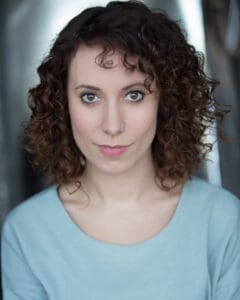 Following up on the last blog, where I shared an excerpt from Alexander & Rebecca’s audiobook, today I’m sharing an interview with my narrator, the fabulous Sarah Kempton! We chat about her background and her creative process, and she shares some behind-the-scenes tidbits about recording this audiobook. Thanks so much for taking the time to answer my questions, Sarah! I can’t wait to work with you again on the next audiobook!

The audiobook for Alexander & Rebecca (Royals of Valleria #1) is available now on Audible and Apple Books/iTunes.

If you’re new to audiobooks, I recommend checking it out on Audible and taking advantage of their 30-day trial! Check out Audible US, UK, FR, and DE.

I trained as an actor and have been working largely in theatre for the past 10 years. A few years ago I also started doing improv and co created an improv show that tours festivals around the UK. I did some improv training with UCB in New York too which was fun. With the improv show we get to play at the Edinburgh Festival each year which is always amazing (and exhausting!!). I’ve been working as a voiceover for about three years now and very quickly learnt audiobooks were my niche.

What do you love most about narrating audiobooks?

I’m a big reader, even when I’m narrating all day I’ll still be reading a book at night, I just love books. I also love telling stories so the thing I enjoy about audiobook narration is the chance to bring to life an authors world and really tell that story to the listener.

What qualities make a great narrator? Share some tips for aspiring voice actors.

I think it’s so important to really paint the picture of the world for the listener, don’t overperform or get in the way of the text just tell that story. I imagine I’m talking to you directly as if you were in front of me. It can feel quite clinical in the booth so it’s good to always remember the people you’re telling the story to.

Do you prefer to read in print or ebook or listen to stories in audio?

I prefer to read in print, I like the feel and smell of a book. I do, of course, listen to audiobooks as well but print is my number 1. Maybe I’m just a control freak and like to do my own character voices?! Although when I’m working and narrating a book I use my iPad so I can scroll quietly and I have an app on it where I can mark the text up.

Name an audiobook you just loved to listen to. What about that narration makes it special?

I’m currently listening to Alan Partridge From the Oasthouse by Steve Coogan which I love, it’s hilarious. I’m a comedy nerd so I love a comedy character book. But, I also have to say the Harry Potter series narrated by Stephen Fry is just so beautifully done, I feel I’m in the world when I listen, he beautifully creates the atmosphere.

Do you have a ritual or routine you do before sitting down to record the audio (such as anything to strengthen your vocal cords)?

Yep – no wine the night before is number 1! It drys out the voice so it’s a big no no. Loads of water starting about an hour before I start. I also drink lots of herbal tea, and do a vocal warm up before I get in the booth including stretches and articulation. I have a voice steamer I use occasionally too, especially if I’m doing a long day of narration.

Thanks!! Very similar my end really. I read the sample and then will quickly think “ooh yes this one!” or it just might not click with me. I’m going to spend a lot of time with the book so it’s important to connect with it I think. I know which genres of books my voice suits as well so I beeline towards those. The thing that always clicks with me is interesting characters. I think that’s the actor in me looking to play with the different characters in the story. I remember in your sample, meeting Rebecca, Alexander, and Cat and immediately really loving how different they were to each other and how clearly their characteristics were drawn. I could straight away see them in my mind and when I can do that it’s fun to play with how they sound.

Do you read a book before you start recording the audio, or do you just read as you go?

I do indeed read the whole thing before I start. It’s important to know the journey of the characters, it’ll inform how each one is played. Again with the story, I need to convey it clearly to the listener so I need to know where it’s going. There may even be throw away comments that I might need to flag a bit as they’re important later, or even the opposite and down play moments to keep secrets that’ll come out later. Most importantly you don’t want to record the main character of the whole book in a Yorkshire accent when in the last chapter it suddenly mentions that they grew up in Northern Ireland!!

I know we went back and forth on a few of the character voices, but generally how do you decide on the specific voice and tone to do for each character?

I take any description I can of the character – you were fantastic with the level of detail so that was great. I comb the text for any character descriptions and then I use that to physically picture them in my head and feel what they’d sound like. I tend to go for the most obvious – e.g., Marcello: Military man, head of security – I imagined a sort of Jack Bauer husky cool type. I will quite often think of a celebrity or character who they remind me of and take on the feel and tone of their voice.

I remember really enjoying when Alexander first goes to Rebecca’s flat for dinner and they’re getting to know each other. I just could really picture this moment and loved the way the section developed, although it did make me hungry. I’m thinking about how much I want that strawberry cake now just remembering it. There’s a scene between Alexander and Marcello that I found quite tiring vocally. Just technically male voices take more effort as my vocal chords are sitting so low, so two men talking to each other means my vocal chords are having a massive work out!

What’s the longest day you spent recording Alexander & Rebecca? How many hours did the overall recording and production take for this book?

I’m pretty consistent with record day length so I didn’t have any massive long days on this one. I record for about four hours a day and edit for about two. Four hours may not sound much but if I go for much longer my voice gets tired I start to make mistakes and it could affect the quality of the book so it’s not really worth it! I’d rather take longer to record the book but my voice sound great, than push it.

When you record, how do you break it up? For example, do you read an entire chapter at a time, or do all the separate voices first, or something else?

I do it on page count. I’ll do a test day and record a finished hour of book. I see how many pages that is, and that’s my daily target. I’ll have a couple of short breaks in that session but other than that I read straight through. I do the voices as they come up, not separately, I can literally see the character in my head when I see their lines so I can easily have a conversation flipping between multiple character voices and flip back to me narrating in one go. Sometimes I’ll trip over something so I just cut, delete and pick up where I left off.

Thanks again for answering my questions!
~Marianne