WOW. I cannot believe this year is almost over. I’ll be giving you an update of 2020 plans in January and the books – yes, plural! – I worked on in October & November that kept me so busy I didn’t blog at all. Today, however, I wanted to pop in and do something different and share the story behind my latest release (a second chance prince and an actress romance): Ethan & Anda (Royals of Valleria #11). If you haven’t picked this up yet, you can do so via these links: Amazon Kindle, Apple Books, Nook, Kobo, Google, and Goodreads.

THERE ARE SPOILERS AHEAD! So, if you haven’t read the book yet, do so first. Otherwise, read ahead at your risk. 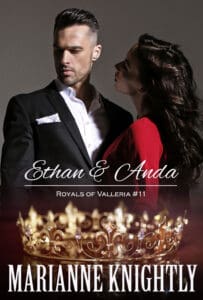 So how did Ethan’s story come about? Well, actually it popped into my head FOUR years ago in 2015, over a year before our beloved Harry & Meghan even met according to this article. So, though many have commented I was inspired by them for this book, it’s not true, though I absolutely adore Harry & Meghan – they and their romance are very inspiring!

Before I even started writing the first Royals book (Alex & Rebecca’s story), I did some planning for the series. Long-time blog readers know how much I love planning in general (though I usually don’t plan a lot before I write each individual book). I decided on all the names of the main characters, and on several of their love interests as well. I hadn’t picked out Anda’s name at that point, but I knew Ethan would fall in love with a movie star.

(Fun fact – sometimes I haven’t even picked out the love interest’s name when I start writing, because who the character is comes to me before their name does. For example, in Ravage (Seaside Valleria 4), Everett’s name didn’t come to me until I’d written maybe a third of the book. Sometimes the muse works that way!)

I had several ideas/directions for Ethan’s story and, about a month before I started writing it, I started thinking about which way I’d go. Because he’s seen so little in the other books, I realized a lot of my lovely readers didn’t have a full sense of him. He usually only pops in during times of health crises (like Arianna’s pregnancy and Gabriel’s heart attack). So, I wanted to let you know what he’s been up to all this time.

Once I decided to delve into the past – BAM – the rest of the story came rushing to me. I knew he’d fall for a movie star, but now it was a second chance romance.

They met in the past, but where exactly did they meet? Ethan’s been quiet for the last couple years (at least according to the overall timeline I keep for the books) so their relationship had to be a secret. So why was it a secret? BAM again. She’s a spy/secret agent! Wait, Ethan should be, too!

Suddenly, I couldn’t wait to start writing the damn thing and diving backwards through the series to give you more background into Ethan’s thoughts during all those family dinner and other scenes. I know some folks commented that they didn’t like the flashbacks, but it was a joy for me to revisit those scenes and write them from another point of view or add another layer to them. So much has changed for our Royals (and my writing has evolved, too) since those earlier books.

Anda is definitely one of favorite female characters I’ve written. One of the themes you often see in my books is perseverance, for women or men. Anda’s been through some tough shit, but she’s still standing at the end of the day, still moving forward, still trying her best and risking her life to protect a man she loves who (at one point) didn’t give her the love she needed in return. Of course, Ethan gets his head out of his ass by the end of the book, and now our newly revealed Royal couple have a long fight ahead of them as they make moves against Envision, the not-so-secret but still secretive organization responsible for the death of Anda’s parents. This storyline will continue in the upcoming Vollywood series, which will feature some new characters from Valleria’s world of film, tv, and more (plus Ethan & Anda with potentially other royals). More updates about this in my next blog post.

I love, love, love this book, and it might be my favorite Royals book to date. Is it wrong to pick favorites? Maybe, but it’s definitely how I’m feeling right now.

Did you like this behind-the-scenes look at my writing process? Have you read the book yet? Leave me a comment and let me know! If you have read it, please consider leaving a review at Goodreads or wherever you purchased the book. Your reviews help others find my books. Thank you!

2 thoughts on “Story Behind the Story: Ethan & Anda”