It’s something I’ve written about before, but I was reminded of this recently. 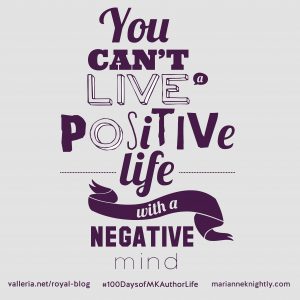 As someone who’s struggled a lot through their life on various levels, I’ve often felt like my life was doomed to stay on negative paths. When your brain is so used to things going wrong, it just assumes everything will, and so it’s hard to stay positive. One of my big resolutions this year was to keep a positive mindset, no matter what shit came my way. It’s been really fucking hard at times, but I’ve overall managed to do it. And WOW, what a difference I’ve seen.

Does bad shit still happen? Of course. A positive mindset doesn’t mean bad things won’t happen. They will. That’s life. But, whenever I have a setback, here are a few things I do to stay positive:

The biggest change I’ve seen from focusing more positively may seem pretty simple, but for me it’s been life-changing: I don’t automatically think negatively about myself anymore. That’s it. Simple, right? But after so many years of being stuck in the negative, I always thought negatively first. I’d blame myself for things that weren’t my fault, or I’d be an obsessive apologizer (do you say ‘Sorry’ in emails a lot? I know I did), and on and on.

Now, I take a moment to stop and think when something negative happens. Why did it happen? How can I stop it? What can I do to prevent this from happening again? Sometimes you won’t have all the answers (or even any of them), but just stopping your brain from automatically thinking negatively can be a huge life-changer. It was for me. I never believed people when they told me what a the difference a positive mindset could make. I was stuck in the negative where I thought I could never be free of the shit I was dealing with. It wasn’t until I decided to make that change for myself – and stuck to it – that things started to change. It’s not easy to break bad habits, and thinking negatively about yourself is a bad habit. It takes time and dedication to overcome that, and I’m so glad I’ve started to work on that this year.

Have you tried shifting to a positive mindset? Comment on this post and let me know (if you’re receiving the blog by email, just click “Read More” to navigate to the blog page to comment).