Now that I’ve published Ripple, the second in the Seaside Valleria series, I wanted to give you a quick look and what’s coming up next. I wrote a little bit about it in this post, and I gave my newsletter subscribers a few more details, so I’m sharing them here now, too. 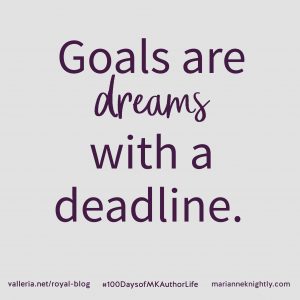 Every year around June or July, I like to do an assessment of not only how my books are doing but how I’M doing personally as well. How did the first six months of the year go? The last twelve months in general? How am I doing financially, physically, mentally, professionally? What worked well? What didn’t? What can I change to make the next six months more successful, personally and professionally? What challenges could I face, and how should I prepare for those now?

The answers to those (and other) questions really help me refocus my life and energy. I don’t want to spend time on someone that doesn’t deserve it, or on something that I could do more efficiently.

I love setting goals. I used to fear them (and my day job is very goal-driven and goal-dependent, which didn’t always help that fear), but I’ve now learned to embrace them. How? By remembering one small, simple fact:

The goals I set for myself in January, may not make sense in July. Maybe they didn’t even make sense in February. Shifting my priorities, shifting my goals to meet my needs is just common sense. Sometimes we feel the need to keep pursuing a goal because we feel like we HAVE TO finish it. Bullshit, I say. While it’s true that some goals you might need to see through, a lot of them you can change as your priorities change, too. This was one of the toughest lessons I learned last year.

So, as I drafted my 2019 schedule and tweaked my remaining 2018 schedule, all of those reflections were in my head. I know that trying to publish five (or even four) books next year might be pushing it physically for me, which is why I’ll do another assessment in January, in case I need to shift things around. And I’ll check in again in July 2019 (or sooner) to figure out the rest of my 2019.

Despite the craziness of this year so far (releasing four books in about six months was crazy!), I am feeling really positive about my author business for the rest of this year and into next. I’m going to keep working hard and, hopefully, you’ll keep taking a trip back to Valleria with me with each new release. Here’s a sneak peek of what’s to come.

So what’s next for the Seaside Valleria series?

FRANNIE! Our favorite chef will be featured in Seaside Valleria #3. I’ve already written her story, and it’s with my editor now. If everything goes well, I’m planning a release for August/September (definitely sometime this year). I loved writing her story and can’t wait to share it with you. Her story will be the last book I’m likely to publish this year, because I have a lot of personal/family stuff going on in the fall that would make it difficult for me to finish and release another book in 2018.

Seaside Valleria #4 will feature BETH! I’ve already started writing her story, so look for this release in early 2019.

Seaside Valleria #5 will feature LIZ! This will also be a 2019 release.

Right now, I’m planning for the Seaside Valleria series to be a 5-book series, so Liz’s story will be the last one. Don’t worry though – I’m working on an epilogue to the series that will feature all of our seaside couples, so you’ll see some fun scenes from their future. And, just like with our Royals, you’ll probably see them pop up from time-to-time in other Vallerian books and series. I can never really say good-bye to my characters!

What about the Royals?

I’ve already been thinking about that book, and it will be released in 2019, too. I’ll have more details about who will be featured in that book in a newsletter and/or blog this fall.

Another Vallerian spin-off series! The next Royals book will actually introduce some of the characters in that series. This will be like the Seaside Valleria series, where you’ll see a royal (or two or more) from time-to-time, but the series will feature non-royal characters. I’m hoping to release 1 or 2 books in that spin-off in 2019, with the rest in 2020. I’m not sure how many books will be in that series at this point, but I’m thinking along the lines of 4 or 5 – don’t hold me to that, though!

Since I’m already thinking about 2020, I’ll also mention that I’ve got some really fun royal-filled ideas as well, so stay tuned.

That means I’ll be releasing FIVE books this year, and I’m planning to release 4 or 5 books next year, too. Of course, things can change – with the day job or with my health – so books could get shifted around, but those are my goals right now.

Do you check in and change your goals regularly? Are you excited about my future releases? Comment on this post and let me know (if you’re receiving the blog by email, just click “Read More” to navigate to the blog page to comment).