Yesterday, I talked about getting to the root of fear. Today, I’ll talk more about that journey. 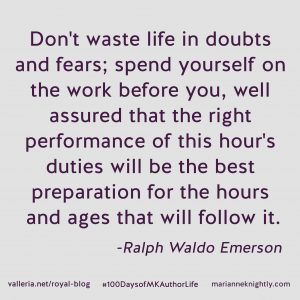 For me, the real fear wasn’t writing, it was living a life I wanted to live. I did intense introspection about my life, taking it apart and examining each piece. This was something I did daily, more than once a day. I still do this now, by engaging in meditation/prayer in the morning and evening. Even just a few minutes of quiet thought each day can make a huge difference.

Back when I first wanted to get to the root of my fear, I wasn’t sure where to start and decided to focus on the aspect of my life that was making me the most unhappy that I felt I could change. That meant I didn’t focus on the people around me, but instead focused on the day job I had at the time. I’d been looking/applying for new jobs for a while, but I dedicated even more effort to finding a new one.

Do you know the saying: What you put into something, is what you’ll get out it? That was true here. While I was putting effort in, it was when I made a dedicated goal – apply for at least one new job each day – that luck started changing. Some might say it was just the law of averages, that because I was applying to more places, of course that lead to interviews and an eventual job offer. I choose to believe there was a higher power at work, whether that was fate, the universe, God, or something else. I’m a big believer in the idea that everything happens for a reason.

Eventually I did get a new job and, while one part of my life seemed okay for the moment, I was still unhappy. I did more introspection to figure out why – was it where I lived? What I wore? What I ate? Was there a medical issue going on that I wasn’t aware of? Was there another reason for me to be unhappy? It turned out there was. There were actually a few reasons, but one stood out above the rest.

“I used to think the worst thing in life was to end up all alone. It’s not. The worst thing in life is to end up with people who make you feel all alone.” This quote by Robin Williams is one of my favorites because it’s so true. What do you do when the people around you are a source of your unhappiness? Family ties, even ties of friendship are hard to break. Since I couldn’t change the views or expectations of those around me, I needed to change my expectations of myself. It’s taken a long time (including therapy and more introspection) but I’ve made a lot of progress on being happy with myself and ignoring the unhappiness other people try to force upon me. Some days – like yesterday, when I had a big family event – are harder, but I can manage those days better now.

After figuring out why my present day (at that time) was unhappy, then I started thinking about what future happiness looked like. What did I really want out of life? Some people seemed to have it figured out years earlier, but here I was in my thirties thinking about it – really thinking about it – for the first time. I’d always used other people’s visions of my future as the goals I should strive towards, but that wasn’t enough anymore. What goals did I want to strive for? I needed some of my own.

That’s when I started to think about writing.

Tune in tomorrow as I talk about the next phase in my overcoming fear journey – fear of success.

Have you ever examined the fears you have? Comment on this post and let me know (if you’re receiving the blog by email, just click “Read More” to navigate to the blog page to comment).