I’ve mentioned the editing process, but what do I do after I finish a book? 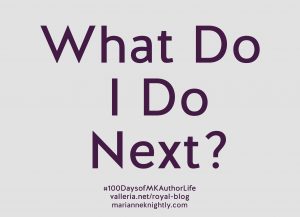 Usually when I’m finishing up a book, I tend to ignore quite a lot around me or put off doing things until I’m finished. That focus helps motivate me to finish faster, because some of those things might be time-sensitive. That meant yesterday, after the day job, I was doing very mundane things like cleaning, organizing, paying bills, running errands, etc. Though these tasks aren’t the most exciting, they’re very important for my creative process. I clean up and file away the notes from the book I’ve just written (I know I’ll need them again once my editor sends the book back, so I actually don’t get rid of them until I’ve eventually published the book). I re-plan my next several days, and prioritize which author and life tasks need to come next (for the former, it’s finishing up Rush and Ripple).

But the most important outcome of taking some time to do the mundane, is that it gives my muse a rest. Because last year was so incredibly challenging for me personally, and I wasn’t able to really publish anything at all, I’ve really pushed myself (and my muse) this year. Even though I’m especially itching to finish up Rush, it was more important to take a ‘day off’ and replenish my muse before I started working on it. Just like you might rest your body after a marathon, I need to rest my brain after the marathon of writing a book. Today, I feel refreshed and ready to tackle the weekend.

Do you need to rest after finishing a project, whether creative or otherwise? Comment on this post and let me know!