How do book covers get designed? Here’s a behind-the-scenes look. 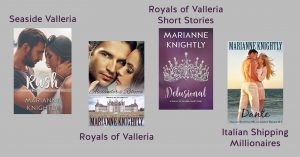 Covers aren’t easy. Besides the graphic design knowledge needed, they can take some time. Covers – just like fashion – also have trends. What worked for me a few years may not work or sell as well now.

First, a little background. I design my own covers. Other authors or designers reading this might cringe at that, but when I was starting out as an author I had ZERO money in my budget for book covers. I did, however, have wifi and access to YouTube so I began teaching myself. I also managed to find some low-or-no-cost classes to learn Adobe Photoshop and my journey began. My early covers (of books not available for purchase anymore) were…incredibly awful. Seriously. Even I wince thinking about them. But I’ve continued to learn and take classes over the past four years (I even took a class earlier this year) and I’m always working to improve.

Besides the financial aspect, I really like having creative control over my covers and just having the Photoshop files to reference whenever I need them. For example, when Facebook changed the dimensions of their cover photo image, if I didn’t have the files, I would have needed to go back to a designer to redo my social media images, which could have cost me more money. On the other hand, delegating tasks like that can be very helpful and I wouldn’t mind doing that in the future when I’m doing this full-time. A lot of authors will hire a graphic designer (and obviously there are some amazing ones out there) but designing is something I really enjoy doing and learning, so I’m going to keep doing it in the meantime.

For the most part, I love to feature a couple on my covers and their faces. This is usually author/designer preference, or what the genre calls for. Some authors never feature faces but will have a couple on the cover (so you might see their bodies but no faces), others don’t put couples at all (like Kristen Ashley, who I ADORE, though her recent Honey series did feature a man’s body on each cover), and some will only feature the female character but not the male (like a lot of Noelle Adams’s covers, who I also love).

For me, it’s really hard to find a good photo to use, because I do want the cover to reflect the characters as much as possible. Sometimes that isn’t always possible (see below, when I talk about the Seaside Valleria series). Sometimes I’ll finish the cover even before I’ve started writing because it helps inspire me as I do (this happened with Arianna & Finn, Royals of Valleria #3). Other times, I’ll make the cover while writing the book (like I’m doing now for Seaside Valleria 3), or even after it’s finished (like I just did for the upcoming Royals 10).

I also like to keep covers consistent across my series, meaning the photos might change but the fonts and text placement and general look will remain the same. Here’s how I do that for each series.

Italian Shipping Millionaires. This was one of the first series I published and is the only early work of mine still available for purchase. My writing style wasn’t as refined back then. Sometimes I wonder if I should go back and re-edit this series, but then I think of all the new things I want to write and stay focused on the future. The covers for these are straightforward – couple on the cover, my name at the top and the title and series title at the bottom. I really love how these turned out and I don’t think I’ll update these anytime soon. If you want to learn more about this series, you can find the info on the my main author site.

Royals of Valleria. This is my biggest series to date. All of the covers feature two images: a couple at the top and a location at the bottom (the exception to this was book #5, which was a novella). The title and series title are across the middle, with my name at the bottom. While I do like the covers, I think it’s time for an update. This year, one of my goals is the get the Royals of Valleria series in print, which means designing print covers. Since I’ll need to redo the covers anyway to prep for print, I’ll be updating these. I’m not sure yet how that will look, but I’m looking forward to the creative challenge. I’m also working to update the ebook box set covers so they’re consistent as well.

Royals of Valleria Short Stories. These are short stories featuring the characters from the Royals of Valleria series (around 6000 or so words). I give this away as an exclusive to my newsletter subscribers only (it’s not available in stores!) and I just wanted a simple cover for it. I only have one short story that I’ve given away so far, but there are others in the works. The covers will feature some sort of royal item (maybe other crowns or scepters, etc.), or maybe I’ll just keep the existing crown and switch out the colors for future covers. I haven’t decided yet because that shade of purple is Valleria’s purple (I love to feature it, which is why you’ll see it across my sites and images) but switching up the colors could be fun, too. If you want to get this story for free, you can sign up for my newsletter.

Seaside Valleria. This is my upcoming Royals spin-off series set in the Vallerian seaside town of Masillia, featuring the folks from the local pub, the Seashell. Though royals drop by, this is not a royal-centered series (more like a small-town romance series) so I wanted a different look to distinguish it from the rest. All of the covers will feature a couple, and have similar text and text placement across the bottom half. I’m in LOVE with how the cover came out! I really agonized over this one, because I really want this series to be successful. Writing these books – writing the women in these books and what they go through – has been an emotional journey for me and I really want to share that with others. The first book, Rush (Hector & Millie), will hopefully come out this month (!) with book 2 to follow in June. In tomorrow’s post, I’ll reveal the cover for Seaside Valleria 2 so stay tuned!

*P.S. – Sorry to those who didn’t receive yesterday’s blog via email due to a technical glitch. You should hopefully today’s and yesterday’s together!