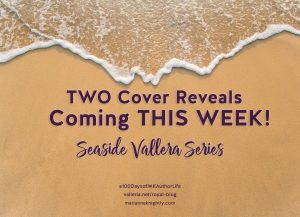 Because over the next few days I’m going to do not one but TWO cover reveals! That’s right! I’ll be be debuting the covers for the first two books in the Seaside Valleria series! I’m SOOO excited to bring these to you, and I hope you love them as much as I do. I’ll also be revealing the titles, too! I actually already have Seaside Valleria 3 done as well except for the title (I’m still trying to decide what that is), so I’ll debut that in the future.

For those of you wondering about the cover for the next Royals book – that’s ready, too! I’m going to wait until next week (or a little later) to debut the cover and title for that one.

P.S. – I gave my Facebook groups a sneak peek at the covers. If you like my books and love exclusives, head over and join! I’ve got a group for fans of my Royals series and a general one for fans of Valleria (the sneak peek for these covers was in the Valleria group).