So, I’ve talked about my bitchy muse and how I tempt her back, but what happens when she comes back with TOO many ideas? 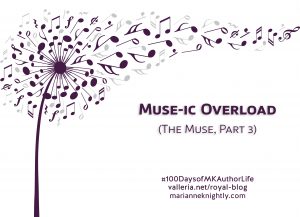 Most people will tell you that you can’t have too many ideas. They generally would be right. Having ideas sparks creativity, which can help your brain figure out which project you’ll take on next.

Yet, having all those ideas in your head at once can be really overwhelming. So, what can you do to keep the ideas from floating away like dandelion seeds in the wind? Here are a few things I try:

Take a breath. Try some of the same techniques I outlined yesterday (like meditation or emptying your mind) to see if that helps you. This won’t make your ideas disappear, it will just help to focus them a little better. Usually, my ideas are tied to something I’m feeling or seeing in real life – whether that’s an emotion or situation, etc. – so I take one minute (or ten or a hundred) to dive to the root of the idea. Where did it stem from? Is this a real idea I want to pursue, or just a distraction my mind needs right now?

Listen to music. I LOVE music. Music has gotten me through some tough times, exciting times, painful times, and happy times. I’ve had certain songs inspire characters while I write, others that helped soothe me after writing some really emotional scenes. Music also helps me when I’ve got too many thoughts or ideas running around in my head. The right music – just like the random games I mentioned yesterday – can distract that portion of my brain that’s running too fast and force it to slow down and focus. The songs that help me vary as much as my moods do, and include everything from classical to alternative to punk rock to country to pop to…I think you get the idea. Find a song that works for you and your mood.

Don’t write it down…yet. The first instinct you might have could be to write everything down, but sometimes it’s more helpful to wait before you do that. When I’m thinking about plots for future books, I usually think about it for weeks (or maybe even months) before I put anything down on paper. I want that idea to ruminate in my head because it could bubble up into something entirely different or new or even better (which is what usually happens to me). One of the things I used to worry about most was forgetting an idea, so I would write everything down (my memory is not so great). Do you know what happened to those ideas? I didn’t really follow through on them. The ideas I followed through on were the ones I kept in my head, the ones I kept thinking about and trying to make better.

Catch those ideas. Some people work better if they write ideas down right away – that’s okay! If this is you, then catch those ideas! If there’s ideas about plots, jot them down. If there’s ideas about an art project you want to make, sketch out a little bit. If it’s a crafting project, write down what you want to make. Then see if you have the supplies to tackle the idea. For a book, I might see if I need to do extensive research first; if that’s the case, I’ll bank it for the future (I have about three Vallerian spin-off series in this boat at the moment). You don’t have to follow through on all of your ideas right now. By prioritizing your ideas, you’ll have a better understanding of which ones you can do next. Plus side – by keeping track of the ones you can’t tackle just yet, you’ll also have a repository of ideas for when your muse takes a vacation.

Find the idea that doesn’t leave you alone. Trust your instincts. If there’s an idea that won’t leave you alone, or that you’re thinking about the most, focus on that one first. If you have a deadline for another project that you need to focus on, but this new idea won’t leave you alone – take a few minutes to work on the new project. Maybe ten minutes, twenty minutes, even an hour – spending time on another project can help clear your head, give you a fresh perspective, and help you better focus on your deadline-looming project. Now, you could be using this new idea as a procrastination technique (I’ve done that, too!) in which case you might be better off taking a quick ten minute break to work on your new idea instead of that hour. Remember, the sooner you finish your other project, you can start on this new one. So, if this is one idea that won’t leave you alone, finish up other things you need to do in order to focus on it.

What do you do when you’ve got too many ideas? Comment below and let me know!