My muse is a temperamental bitch. She comes and goes as she pleases and leaves me hanging in the lurch too often. But I can’t live without her. 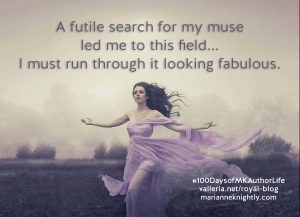 Before you say that muses aren’t a real thing, I say yes, logically, I know there’s not someone telling me what to write. For me, my ‘muse’ is the feeling I get about a story. Some stories just grab me and just pour out onto the paper. Before I know it, I’ll have written thousands of words. This happened recently with parts of Hector and Millie’s story (Seaside Valleria 1, coming out soon). When I finish writing one book, I’ll usually know which book I want to write next. When I was finishing up Royally Ever After, for example, Lorenzo wouldn’t leave me alone, and so I decided to write his story next.

Other times, I may have decided to write one story, but my muse forced me in another direction. For example, after I finished up A Royal Holiday, I thought I’d be writing Carolina’s story, yet Cat pushed her way in and forced me to write her story next. Five books later the muse for Carolina’s story still hasn’t returned, so Book 11 of the Royals series will feature someone else (likely Ethan), but that could change by the time I sit down to write it.

Yet, there have also been times I didn’t know whose story to write. My ‘muse’ seemed to have left me. That happened after I finished the first Royals book. I wasn’t sure who to write about next, but the deadlines were looming so I focused on Marcello. I love Marcello’s story, but it didn’t come as easily to me as other books.

That creative feeling I get while writing is really important, at least for my writing process. With the way my brain works, if I’m not feeling the story when I sit down to write, I know the muse is taking a break and I should focus on something else. In that situation, I could sit for hours and barely write anything so I know my precious time and energy is probably better spent elsewhere until that creative feeling returns. Though, all that shifts when I’ve got a deadline (like a book due to my editor). In those times, I have to push through that creative wall and force myself to write. I can actually write under pressure (I know some writers who only write in those circumstances) but because my physical (and mental) energy gets drained if I do that, I try to avoid it when I can.

That’s also one reason why I go with my muse’s flow. If I’m inspired by something that’s pushing a story forward, I want to take advantage of that and use that creative energy while I’ve got it. While creativity doesn’t tend to run out, my physical energy does run out. So, if I tax myself too much physically or emotionally, then my creativity will take a break until I’m feeling more balanced. So, even though my muse is temperamental, I still listen to her because fighting her takes too much energy and the creative results of that aren’t the best anyway.

When my muse takes a vacation, how do I encourage her to return? Tune in tomorrow for Part 2 of this series to find out!

4 thoughts on “That Bitch! The Temperamental Muse – Part 1”