I previously wrote a little bit about my writing process and what it means to be a pantser. Here’s another peek at the process, taking a look at research. 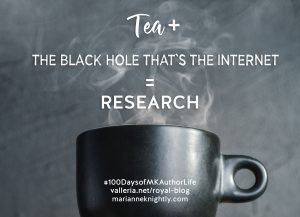 Before I even started writing Alex & Rebecca’s story (the first Royals of Valleria book), I took a LOT of time to do research and develop the world of Valleria where my characters lived. I knew all of the royal family (at least the king and queen, and the royal siblings) before I started writing Book 1. I KNEW Alex and Rebecca – our future king and queen – would lead the series. I don’t claim favorites with my characters, but I love this couple, which is why I try to feature a small storyline with them in every Royals book. But research doesn’t stop when you start writing the book. As I mentioned in another post, I’m a pantser and tend to write ‘by the seat of my pants’ rather than plotting out every single scene. Being a panster doesn’t mean I write until I want to stop. Earlier on in my Royals series, I’d often stop in the middle of a scene to do some research, to keep the books as authentic as possible. Even now, if I find I need to research something, I’ll do one of two things: I’ll either pause in the middle of writing (if it’s something quick I can discover, like what ingredients might be needed for a recipe a character is making) or, if it’s something that would take longer time, I’ll just make a note to go back and research it later.

One example of the latter came as I was writing the first book in the upcoming Seaside Valleria series. The first book focuses on Hector, who was introduced in Prince Lorenzo’s story, and is a former Vallerian soldier who has lost both legs below the knees. I spent a lot of time researching what Hector may have gone through, both emotionally and physically. I also spoke to someone I know who wears a leg prosthesis, to make sure that Hector’s story was as authentic as possible. I also took classes. The Romance Writer’s of America – a membership organization for romance writers – has local chapters that feature affordable online and in-person classes and workshops in just about everything and anything you may want to know. I’ve taken innumerable classes over the last several years. For Hector’s story, I took courses which gave me a background on the military, and another course on PTSD. These courses often feature expert instructors (like a former member of the military for the military course).

I take research very seriously, but I am a mere human so I will make mistakes. If you’re a reader and you see something that doesn’t make sense, just contact me and let me know so I can look into it, or try and correct it. That said, I created a fictional world. My Vallerian Royal Navy, for example, doesn’t mimic the navy of either the US or the UK. I took a inspiration of various elements from multiple navys for my Vallerian one, because sometimes an author just needs something a little different to make her stories work. An example of this is Prince Ethan’s character who’s a doctor in the Vallerian Royal Navy. I wanted him to be able to marry his royal siblings, so I changed the rules to make them fit my plot needs. (P.S. – if you haven’t read the books yet, I won’t tell you who Ethan marries or *Spoiler Alert!* who he may marry next!)

Research takes time, but it’s time I take seriously. What tools do you use to conduct your research? Share them in the comments below!

1 thought on “Panster Pause: The Art of Research”