Where do I get my inspiration for my characters or settings? 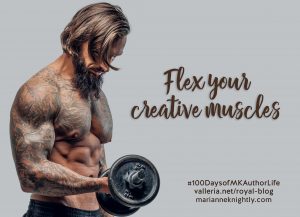 I’ve mentioned before how some characters just come to me. I’m going to mention Sarah & Vittorio again, because I just LOVED them. Their obvious enjoyment in sex aside, some of the struggles they faced in their book came to me early on as well. That’s because, in my own way, I have had similar issues.

SPOILER ALERT: If you haven’t read the book, you may want to skip the next few paragraphs.

Prince Vittorio (or Rio) suffered emotional and physical abuse as a child. As someone who has suffered through abuse as well (different from Vittorio’s but abuse is abuse – period), I really wanted to show what part of that recovery is like, particularly when you have guilt that you’ve survived, but someone else may not have. His story is also about trust – needing to trust that someone’s there for him (that Sarah could be there for him, beyond the sexual chemistry they share), because trusting someone with your heart after it has been cut to shreds, is really fucking hard to do.

Sarah’s main issues in the book focus on her work, proving herself there, and how her personal life affects work (and vice versa). She’s a woman who isn’t taken seriously at her job, despite the fact that she’s really fucking good at it. Who she’s dating, her sex life, etc. – none of that affects how she does her job, but people think that shit matters.

Sound familiar to you? Have you faced something similar?

Sarah, because she needs to prove herself so much to everyone else, overcompensates by trying to control every situation, even her ‘fake’ relationship with Rio. Sarah spends the book overcoming those challenges that so many women (yes, even princesses) face. I often wonder how real-life princesses stand the scrutiny they’re under – it’s not easy being a royal!

Now, all my books are works of fiction* (not real! though I wish I could visit a real-life Valleria), but the situations people face, and the emotions they have – those are often universal. You’re talked down to at work, or you’re made to feel like you aren’t worth anything by family or the public, or, or or… These things happen to everyone (even me) and I write books where people overcome that, because they deserve their happily-ever-after (and in real life we don’t always get that).

SPOILER ALERT OVER. Rejoin the blog!

Now, aside from emotions that can influence my writing, other things also inspire me. Sometimes it’s a pretty day – I’ll start imagining my characters on a sunny day or even a dreadfully rainy one. Sometimes I’ll be inspired by a piece of art and think ‘What’s Princess Carolina’s latest painting?’ and I’ll try to figure out how to add her latest work into a scene. I have to say that inspiration used to be difficult for me. I realized that the creative part of my brain is just like any other muscle in my body – it needs to be exercised.

Exercising your creativity can take form in a number of ways. #The100DayProject that I’m participating in is a great way to start – just do something little for 100 days. Paint something, write something, craft something, etc…even just thinking about something creatively would count in my opinion. I get inspired by colors, shapes, food (so often the food), clothes…even real-life royal settings have inspired my fictional ones.

I also spend a little time each day thinking about future books (sometimes maybe only 15 minutes, sometimes longer, sometimes less) but that helps me focus my creative energy. It’s like stretching a little – not a full workout, just waking up the brain and stretching it out a little, getting it warmed up. That means that, when I do sit down to write my current book or jot down ideas for a future book, I’ve already got something I can start with. And I thought of it while I was driving to the store, or running errands, or just vegging out in front of the television after a long day, or doing one of a thousand other little tasks.

Once you start exercising your creativity, continue to do a little each day. Set aside time each week if you feel your schedule’s too busy for every day. Find a way to exercise that beautiful brain of yours to keep those ideas flowing.

*My books are works of fiction. Names, places, and events are either products of the my imagination or are used fictitiously. Any resemblance to actual places, events, or persons, living or dead, is purely coincidental.