I get asked a lot of questions about which book or character is coming next. I’ve got an FAQ page on my author website with answers to some of those questions, but here’s a little background on how I choose which characters to write about. It’s a question writers are often asked and every writer has their own way of doing it; here’s mine. 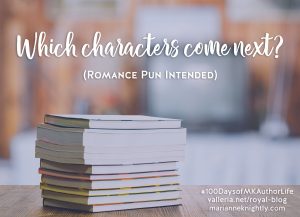 While I’m writing one book, I don’t always know which character or couple I’m going to write about next. (For example, right now I’m writing Seaside Valleria 3, but I’m not sure who will feature in #4 yet). By the time I finish the book, however, I’ll usually have a better idea. When I was finishing up Royally Ever After, for example, Lorenzo wouldn’t leave me alone, and so I knew I’d write his story next.

Sometimes things don’t always go as planned. Case in point is the Seaside Valleria series. I originally had another couple as the first book in that series, but my muse wasn’t having it, so I switched to Hector and Millie’s story. In my Royals series, after I finished up A Royal Holiday, I thought I’d be writing Carolina’s story, yet Cat pushed her way in and forced me to write her story. Earlier on in the Royals series, I knew Alex & Rebecca would be featured in book 1, but after that I rushed my muse and focused on Marcello for book 2. I love Marcello’s story, but if I had to do it again, I might have taken more time to relax creatively after book 1 before I picked the character for book 2.

Experiences like this teach me to trust my (creative) gut. I’ve learned that if I’m just not feeling one story, I either need to take a creative break or listen to what’s really inspiring me. My temperamental muse has taught me that I need to trust myself more.

It’s another barrier I don’t think writers talk about a lot. You certainly hear words like ‘writer’s block’ or something similar, but this is different. Learning to trust yourself and the creative decisions you make – whether that’s with your characters or another type of creative project – takes a while to learn. I’ve been writing now for several years and I’m still learning.

Do you struggle with picking which characters to write about, or which creative project to start next? Comment below and let me know!

P.S. – If you’re on my blog email list, Monday’s email didn’t go out! Sorry about that! Here’s the link to the previous blog post, though you may receive them both today via email.